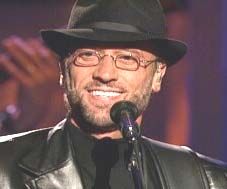 Maurice Ernest Gibb was born at 3:50 AM on December 22, 1949 at the Jane Crookall Maternity Home in Douglas, Isle of Man to bandleader and drummer Hugh Gibb and his wife, Barbara Gibb. He is the younger twin of Robin Gibb by thirty-five minutes.

When Maurice was four, the Gibbs moved to Manchester, and when he was nine, they moved to Brisbane, Australia and settled in a poor suburb, Cribb Island. As a child, Maurice's favorite group was the Everly Brothers, and loved to listen to "Wake up Little Susie." When the three Gibb brothers started out singing in three-part harmonies, Maurice would take play drums and bass, which in this case were a box with cooking utensils and a string tied to a broom.

It could be suggested that the brothers were publicly discovered thanks to Maurice, who dropped the record they were going to lip-sync to at the town theatre, the result singing with their own voices.

As a child Maurice developed a cunning sense of humor, and became known as the group's comedian, doing things like making his tie flip up or telling jokes in between songs at their shows. He saw himself as the "peacemaker" of the group and often settled Barry and Robin's arguments by lightening the mood.

Maurice was also fascinated with cameras, and always tried to buy new gadgets as soon as they were available. He would often film home movies with Barry and Robin as the stars.

The Bee Gees were discovered in Brisbane, Austrailia in 1958 when the brothers would perform at Redcliffe Speedway in between races. They would all sing and Barry would play the guitar. They were discovered by disc jockey Bill Gates and would appear on his radio show, television shows and released their first few albums during the early 1960s.

By the mid-1960s, Maurice played lead guitar and by 1966, he was playing keyboard and strings. The Bee Gees were discovered in Brisbane, Austrailiawhen they would During the early albums, Maurice played piano, bass guitar, mellotron, rhythm guitar (along with Barry), and other parts. The piano on songs like "Words" and "Lonely Days" is Maurice Gibb's work. During stage performances, Maurice usually played bass guitar, and when he played the piano, an extra guitarist would fill in.

In May 1967, Maurice met Scottish pop star Lulu, most famous for her hit single, "Shout". They announced their engagement on December 28, 1968.

Maurice and Lulu were married in St. James Church in Gerards Cross on February 18, 1969. Maurice also got to present the Disc & Music Echo awards the same month. Robin left the group later that year after he and Barry had a feud, Maurice caught between the two. Maurice decided to join Barry and work on the Cucumber Castle television special and soundtrack. Maurice's voice wasn't very recognizable until this album, in which he had some lead and solo parts.

Maurice and Barry split in December 1969 after Cucumber Castle. In 1970, Maurice recorded music for an unreleased solo album to be entitled "The Loner", and released one single he recorded for the album, "Railroad". The single was co-authored by Billy Lawrie, a songwriter and singer, and also the brother Lulu.

He worked for three months with Lawrie and with guitarist Les Harvey of Stone the Crows, drummer Geoff Bridgeford, and John Coleman and Gerry Shurry, the three members of the Australian band Tin Tin, whose first two albums he had produced, filling out what instruments Gibb didn't wish to play himself. Good friend Ringo Starr of the Beatles also participated in the sessions, with Lulu joining in as well, which only yielded one released song, "The Loner." It appeared on the soundtrack of the movie Bloomfield (aka The Hero), starring Richard Harris, and was also released on the Pye Records soundtrack LP to the film.

Maurice reunited with Robin in June and they started recording together again, and all three brothers officially got back together on August 21.

Maurice's marriage to Lulu was crumbling under the pressure of their respective commitments. In April 1974 Maurice met Yvonne Spenceley during what fans call the 'low' of the Bee Gees' career. On August 21, 1975, Maurice divorced Lulu, and on October 17, he married Yvonne. His son Adam was born February the next year.

Maurice and his family moved to Florida in 1977, seeing that the brothers would be frequently touring in the United States. Maurice was less influential in the disco Bee Gees sound of 1975 to 1979, when he played mostly bass guitar. He stated that during the disco era, he would often play rhythm guitar along with Barry.

In 1980, Maurice's second child, Samantha, was born in Miami Beach, Florida. The 1980s, however, were a rough time for him as his alcoholism got worse, especially in 1988 after his younger brother Andy Gibb died.

During the Bee Gees hiatus in the 1980s he worked with both Barry and Robin on their solo projects, and did some instrumental writing and recording including the soundtrack for the film "A Breed Apart". In 1986 he produced and co-wrote an entire album for Swedish singer Carola.

On February 23, 1992, Maurice and Yvonne renewed their wedding vows, Maurice having sustained sobriety for a year with the help of Alcoholics Anonymous.

Maurice loved the sport of paintball, and had a team which he called the Royal Rat Rangers, a reference to his being named a Commander of the British Empire, and to his time at the Little River AA group, where the members referred to each other as "river rats." He promoted the sport at every opportunity, and opened a paintball equipment shop, "Commander Mo's Paintball Shop," in North Miami Beach, Florida.

In 2002, Maurice was made a Commander of the British Empire (CBE), along with his brothers, but the awards were not presented until 2004, after his death. His son Adam accompanied Barry and Robin to Buckingham Palace for the ceremony.

Maurice, who had been the musical director of the Bee Gees during their final years as a group, died suddenly from cardiac arrest on January 12, 2003, during emergency surgery for a blocked intestine. After his funeral service, he was cremated. Initially, his surviving brothers announced that they intended to carry on the name "Bee Gees" in his memory. But as time passed they decided to retire the group name, leaving it to represent the three brothers together.

Maurice's last great project was to produce an album's worth of songs written and sung by his daughter Samantha, which finally appeared in 2005 under the name M E G -- Maurice's initials.

In March 2012, a tribute to Maurice entitled Souls Stick Around: A Tale of the Black Hills and Maurice Gibb, was published as an eBook on Amazon.com. Bee Gees fan and author, Dawnette Owens, began writing the novel in 2003 to honor the legacy of Maurice.

Retrieved from "https://beegees.fandom.com/wiki/Maurice_Gibb?oldid=4224"
Community content is available under CC-BY-SA unless otherwise noted.